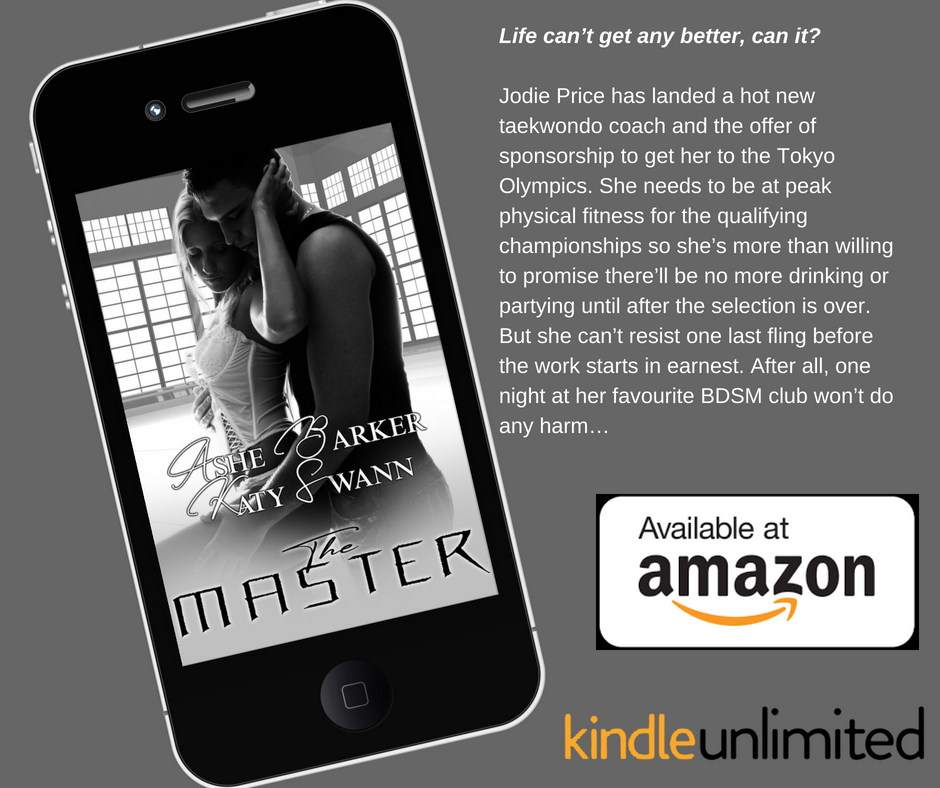 After her long-time taekwondo instructor passes away suddenly, Jodie Price is certain her dreams of Olympic glory have been dashed, and she is thrilled when bold, handsome coach Dylan Atkins offers his help. But Dylan’s training regimen will be more rigorous than anything Jodie has experienced before, and she quickly discovers that he is a firm believer in strict discipline.

When she is caught drinking in defiance of Dylan’s rules, Jodie soon finds herself sobbing and promising to do better as she is thoroughly paddled. Dylan’s stern correction arouses her deeply, however, and it isn’t long before he takes her in his arms and masters her completely. But though his skilled, dominant lovemaking leaves her utterly spent and satisfied, will Jodie trust him enough to tell him the truth when a powerful sponsor tries to use their romance to blackmail her?

Publisher’s Note: The Master includes spankings and sexual scenes. If such material offends you, please don’t buy this book.

Dylan took in the sight before him, barely able to believe the evidence of his own eyes. He would be hard pressed to say what amazed him most—Jodie’s outright disregard for her promise of just a few hours earlier, or that minuscule concoction of crimson latex masquerading as a dress.

The dress won—by a whisker.

“What part of ‘absolutely no alcohol’ was not perfectly clear to you, Jodie?”

He deliberately kept his voice soft but still she had the grace to cringe. Jodie studied the half-empty bottle in her hand as though not entirely certain quite how it came to be there.

“And did we not also discuss late nights? Partying?”

Her voice trailed off. She dropped her gaze and shifted from one foot to the other. At least she didn’t seem inclined to defend her crap choices, but even so…

They had a problem.

“We need to talk, Jodie. Monday morning, at the gym.” He was done. Disappointment and anger warred within him as he stepped past her.

She grabbed his elbow, and Dylan paused. He regarded her slender fingers on his sleeve, noted irrelevantly that she had painted her nails to match the dress. That entire outfit could have been painted on, come to think of it. He lifted his gaze to hers. Her pretty blue eyes glittered, but he firmed his jaw in response.

“Was there something else?”

“Yes. What about the meeting, at the bank? I thought…”

“Is there really any point, Jodie? I explained what would be required to make an Olympic champion of you, and it’s more than just a decent sponsorship deal. It’s a lifestyle, and clearly not one you’re ready to take on board.”

“But I am. I want it, all of it.” She spun around and handed the dregs of her beer to another girl standing open-mouthed behind her, then turned to face him again. “One lapse, that was all. I know what’s required and I do take my sport seriously. I’ll be absolutely dedicated. You’ll never have any reason to complain. I’ll work hard, and… and…”

“Then why are you here, Jodie?”

Was that a flicker of annoyance flitting across her expressive features? She flattened her lips, drawing his attention to the deep scarlet lipstick she had applied.

It hadn’t escaped Dylan’s notice that his star pupil was fucking gorgeous. He was male, after all, and he had a pulse. How could he fail to appreciate that curvy, sexy little body, so supple, exquisitely toned, and supremely fit? As far as Dylan was concerned, strong was sexy, and Jodie had it all going on. But all of that was beside the point. She was his pupil, so off limits. Even here, within the not-so-hallowed walls of Club Sin, that remained the case. All he needed to do now was convince his rampant cock of that inconvenient little fact, and right at this moment he wouldn’t give much for his chances.

She loves the 4 C’s: cats, chocolate, champagne and coffee. When she’s not writing she spends her time as a glorified taxi driver for her children and even finds time now and then to indulge in her interests, which include Tai Chi, dance, music, aviation and reading.